The York Council has been criticised for losing control of the City centre. 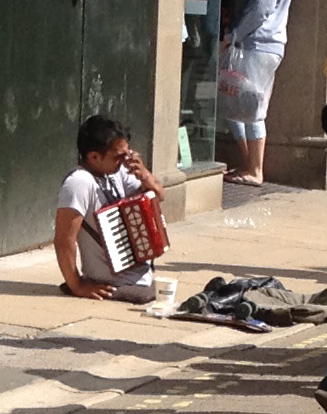 Residents have been dismayed by the sight of severely disabled buskers taking up pitches on Coney Street. The scenes are more reminiscent of post Napoleonic war Britain than would be expected in a modern, relatively wealthy, City.

There was no sign of any Council official taking any action to address the problem. 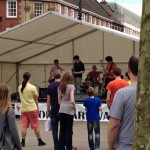 No fewer than 4 buskers were operating in the Coney Street area on Saturday with one “Silverman” seeking to emulate the famous “Purpleman” by sitting on a bicycle albeit looking bored.

Busking used to be regulated in York but the new Labour Council decided in 2011 to make the restrictions only advisory.

Similarly the “pedlar” situation seems to be getting out of control.  Pedlars are coming into the city selling their goods on “pedlar’s licences” but they are not actually adhering to the conditions of the licence which require them to keep moving unless making a sale.

They are selling from huge stalls on wheels but staying in one “spot” all day long. They need to apply for a street trading consent. 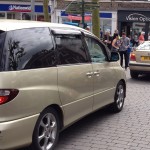 Cars in conflict with pedestrians on St Sampsons Square

The City centre decline can be traced back to the removal of an effective City Centre manager nearly 2 years ago. The Council may have realised their mistake as they announced last month a further major shake up in the remaining members of the team.

£160,000 is being cut off the budget, staff are being sacked and it seems likely that the management will shortly fall into the hands of an independent agency.

The Council’s decision was – of course – taken behind closed doors.

Whatever the structure the new managers will need to make progress quickly.

Not only do we have the problem of weed growth blighting the appearance of public structures – Ouse Bridge is still heaving under the burden of vegetation – but also poor forward planning is leading to police and civil enforcement staff being over whelmed.

Yesterday (Saturday) the Council had scheduled a (Samba lite) Carnival in the City centre on the same day as a Race meeting and a major football match. 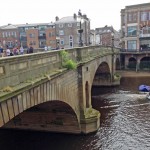 So not only were buskers out in numbers, but there were obvious safety conflicts between the crowds in St Sampson’s Square and vehicles that had strayed into the area.

Even the number of A boards on the public highway, in areas like Church Street, seems to be on the increase.

The Council staff who work in the City centre deserve more support than they are getting,

The Councils Labour Leadership also need to spend more time reviewing the consequences of the decisions that they have taken.