Market will look much the same as it does now 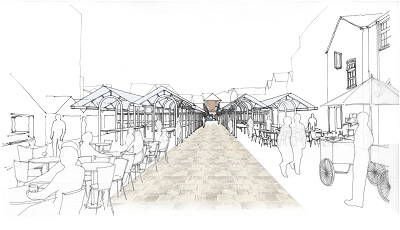 City of York Council has presented designs for the refurbishment of Newgate market to market stall holders and will shortly be revealing prototype stalls.

The Council claims that research conducted in autumn last year showed all those consulted agreed that the market is in need of ‘sprucing up’ and that the new designs should complement the distinctive York character.

All those consulted agreed that the south-eastern end of the market needed to become more vibrant and that music and entertainment and more food on offer would enhance the market atmosphere.

In addition, improved signage, promotion and information about the market was needed for traders and city centre users.

The Council says, “In addition, improved infrastructure such as drainage and storage, with a better roof covering and lighting is planned. Refurbished stall prototypes will be installed in the market this weekend (from 17 May).

They will feature modifications to the drainage and general lighting systems, as well as new paintwork and canopies. The new canopies have been designed to have a better, more weather resistant fit, while translucent fabric options are being trialled to allow more natural light – but not the heat – through in summer.

Coloured feature lighting will be trialled too.

Work is also beginning on new branding and signage in conjunction with the Reinvigorate York project, and new communications tools to improve information about what’s on sale and when are being developed”.