However, the consultation papers excluded housing numbers for the new and amended sites. Liberal Democrat councillors Nigel Ayre, Ann Reid and Carol Runciman ‘called-in’ the decision for further review and at tonight’s CSMC (Corporate and Scrutiny Management Committee) meeting the cross-party committee voted to include the housing numbers.

“The principle of consultation should be that residents are given as much information as possible about the proposals being put forward. We believe that housing numbers are central to this consultation and should be published. Whether one of these sites is for 20 or 200 houses will make a huge difference to how residents view it.”

“I am pleased that common sense has prevailed and residents will now be able to see the housing numbers proposed for each site. The Labour Cabinet should never have tried to hide the housing numbers from residents in the first place. Labour’s argument that including the numbers ties the hands of developers was nonsense, especially as housing numbers were published for sites in last year’s consultation.”

END_OF_DOCUMENT_TOKEN_TO_BE_REPLACED

Plans for a new settlement south of York have received a major blow after housebuilders and planning experts said the scheme was “wholly inappropriate” and the location was “unsustainable”.

The ‘Whinthorpe’ development is planned for Green Belt land at Holme Hill, alongside the A64 to the south of Heslington. The original proposals had space for 5,500 houses – making the planned settlement bigger than Easingwold or Dunnington. However, housebuilders such as the Joseph Rowntree Housing Trust and Linden Homes along with expert planning consultants have criticised the proposals in consultation papers recently published by Labour run York Council.

The consultation responses include:

END_OF_DOCUMENT_TOKEN_TO_BE_REPLACED

The Council s planning committee will be asked to approve this week plans which would see a big increase in the number of jobs on the University of York campus at Heslington.

One application would see the existing Vanbrugh College (Block D) replaced with a 4 storey research, office and teaching block for the Environment Department. The University says the development will create an additional 66 full time jobs.

Some concerns have been expressed about the loss of student accommodation although a new residential block is due to be opened later in the year. The application is recommended for approval. 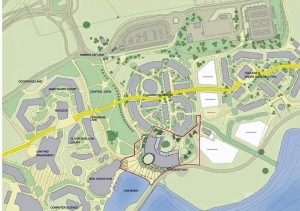 The Planning committee will also consider the details of the three storey  education, social and catering building (Piazza Learning Centre) which will be located between Field Lane/A64 and the Hull Road.

The proposals would provide teaching accommodation (including a 350-seat lecture theatre), library, study areas, 200-seat restaurant and social space. The building footprint would be 2450sqm and total floor space would be 6238sqm

The meeting on Thursday will also consider plans to establish a petrol filling station, restaurant and 50 bed hotel near the Hopgrove Roundabout. The application – which is in the Green Belt – is recommended for refusal by officials

Welcome to Create 14, the annual showcase of our students’  talents, projects and achievements. Experience the sheer breadth depth and magic of their work. More