A freedom of Information request has revealed that the amount of money spent on legal advice in connection with Lendal Bridge, following a recent adjudicator decision, is £6,900 and rising.

This is in addition to the £350,000 in capital and running cost already incurred by the Council.

Originally the Council said that the trial would cost less than £100,000 (and be paid for by appropriating monies provided by central government for improvements to public transport in the City)

If the fine income has to be repaid to drivers, then the costs of the trial will become a heavy burden on York Council Taxpayers 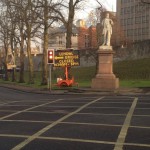 Meanwhile the long awaited analysis of the successes and failures of the Lendal Bridge trial has been published.

The absence of the report was used by Labour at the last Council meeting on 27th March to avoid making an early decision on scrapping the restrictions. Labour subsequently wilted under sustained criticism from residents when it became clearly that nearly £2 million in fines income (Coppergate and Lendal Bridge combined) had been levied unlawfully.

It is the appeal against the adjudicator’s decision on the latter which has led to escalating legal costs.

The report makes it clear that the imperative for bringing forward the Lendal Bridge access restrictions from 2025 – the target date included in the current Local Transport Plan (LTP3) – was the Labour Councils proposal to increase the size of the City by 25% over the next 15 years. Most commentators have already condemned such growth as irresponsible with likely catastrophic consequences for the environment in general and transport systems in particular. The report says that such growth would lead to a 41% increase in traffic across the City.

The main objectives of the trial were always unclear. They are now retrospectively claimed to be to

Even with benefit of hindsight, and manipulating data to fit a required outcome, the trial fails 2 of these 3 criteria. There was less traffic on Lendal Bridge but overall the number of car journeys was the same, congestion (which is not high between 10:30am and 5:00pm anyway) simply transferred to other roads and emissions impacted on the air quality at different locations – it did not reduce.Over 70% of respondents to the Council surveys felt that the restrictions had adversely affected them. This compares to 79% who responded to surveys in west York saying that the Lendal Bridge trial had not been successful.

The data reveals that between September and December 2013 there were 2 serious accidents on Lendal Bridge (compared to none during the same period in the previous year).

The number of “slight” accidents did however reduce.

Labour are promoting an all party “traffic congestion Commission”. Apparently to be independently chaired, the body would be doomed before it started if it was asked to provide transport solutions for the journey demands that would be generated by a 25% increase in the City’s size.

That is mission impossible.

It is made worse by the Labour Councils reliance on the development of Green Belt land – which generally has poorer public transport options than the brownfield alternative which is closer to the City centre.

The real choice will be for residents to make at the 2015 Council elections.

The Liberal Democrats will be offering a policy of sustainable growth.

It remains to be seen what other options are tabled.