Those celebrating the first meeting of this authority – which includes York albeit with limited powers – may wonder about openness and accountability. 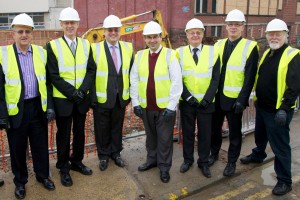 But very little information has been published about the new authority – which the Labour Leadership claims will donate over £40 million towards solving some of York’s transport problems.

The papers for the first meeting (taking place tomorrow) have now been published.

Residents will have no time to read the background to what could be far reaching decisions.

The highly paid Labour Council Leaders – incongruously photographed with head protection (above) presumably in case they meet up with angry Council Taxpayers – will have to be content with their £30,000 local authority pay.

York will have no vote on “budget and levy setting” which will be done by the West Yorkshire Authorities.

But the papers reveal that other Councillors who are “co-opted” onto the “Transport Committee” stand to get as much as £29,000 on top of what they are paid by their Local Authority.

It is likely that the members of the Authorities sub committees will all be Labour Councillors – the need for political balance having been jettisoned.

The names of the Councillors nominated have not been released ahead of the meeting.

No doubt the potential chair of the Transport Committee will be viewing the meeting in the same way that many watch for the results of the Friday evening Euro millions draw.