A freedom of information response from the York Council has revealed that the vast majority of fines issued to drivers using Lendal Bridge are to vehicles registered outside the York area. 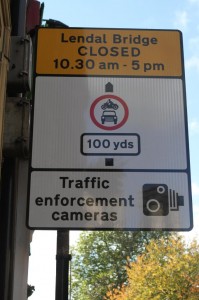 Around 80% of the PCNs issued arrive on visitors doormats.

As hinted at by some correspondents on this web site, the Council has been unable to sustain the fines if appeals are lodged and then pursued as far as a tribunal.

The Council says that 8087 (17%) of PCNs “have been cancelled following representations and for other reasons”.

The figures confirm that the signage used to indicate the restrictions on bridge access are hopelessly inadequate.

They will help to underpin the motion to next weeks York Council meeting from Cllr Ann Reid who will ask for the ANPR cameras to be switched off immediately.

“Council notes the report in The Press on 27th February which revealed important facts about the Lendal Bridge closure.

1. The Labour Cabinet’s six-month trial closure of Lendal Bridge should have finished at the end of February

3. Negative media and social media coverage has been generated to the detriment of our city

5. Traffic displaced by the closure has caused increased congestion elsewhere in the city e.g. Foss Islands Road and Water End at Clifton Bridge

6. Officers have admitted that the trial closure has had little impact on overall air quality

7. The Labour Cabinet Member responsible has admitted that the signage at the start of the trial was “very confusing”

8. Around 45,000 motorists have received fines for crossing the bridge.

a. immediately end the trial closure of Lendal Bridge

b. publicly admit that the trial has been botched and to apologise for this

c. immediately publish the raw data on the trial ahead of their detailed evaluation report

d. commit to consulting with residents and local businesses before bringing forward any future plans for Lendal Bridge.”

5 thoughts on “80% of Lendal Bridge fines issued to visitors”