It seems that the governments decision to provide free school meals for all under 7 year olds (Key Stage 1) could result in a general reduction in the price of school meals.

Contractors are understood to have said that the larger volume of food being cooked would result in lower unit costs for all meals. 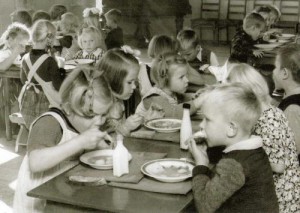 At present school meals in York at £2-25p (Secondary £2.40) are amongst the most expensive in the country.

It now seems likely that if the cost of meals can be reduced to £2 then an increase to a 55% take up could be achieved.

Of the 64 schools in York, 44 are in the Local Authority’s school meals contract with ISS (Education). In York, all meals are freshly prepared in school except for two small schools. Quality and nutritional value of the meals is good http://www.schoolfoodplan.com/contact/

2503 children in York currently are entitled to free school meals. Schools receive additional funding of £953 per pupil in 2013/14 (rising to £1,300 for primary schools in 2014/15) as a pupil premium from the Government, for every pupil registered for free school meals.

A national Department for Education report (Data source: DWP December 2011) indicated that a further 400 pupils in York might be entitled to free school meals but their parents had not registered and claimed for the benefit. This not only means that those pupils are missing out on a free meal but York schools are not receiving the additional funding per pupil as detailed above.

A report of a Council working group is being considered next week.