Residents will be wondering what they have to do to report issues to the York Council……….. let alone get some action. 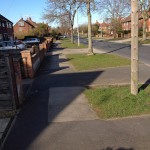 Only a handful of issue types (mainly litter and graffiti) can be reported using it.

Not surprisingly, very few residents now bother to use the facility which was developed at considerable expense to taxpayers,.

Those expecting to be able to report potholes , overgrown hedges, unkempt verges etc via the Councils web site will also be disappointed. That facility has also been withdrawn.

Users of services like “My Council” will be able to record problems. But acknowledgements are often delayed and complaint reference numbers haven’t been issued for several months now, following major systems failures.

Residents can Email the Councils “Customer Contact Centre” but responses are often delayed.

That is the most expensive way for the Council to receive and process issues, adding to the spiral of debt and decline which so sadly typifies the performance of the Labour administration.