Local Assistance Scheme only half forecast

It looks like the York Council will underspend its budget for welfare payments during the current financial year. 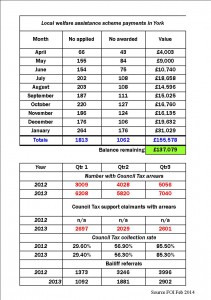 The budget was delegated to the Council by the government replacing – in part – the Social Welfare fund.

It is intended to make emergency payments to less well off people who encounter unexpected expenses.

The York scheme is called the York Financial Assistance Scheme (YFAS).  Its explanatory booklet says that the YFAS can be used to help with, for example:

• Financial assistance in an emergency.

By the end of January nearly half of the Council’s £315,000 YFAS budget had not been committed.

A total of 1062 payments had been authorised with the authority saying that 176 of them were made to people aged under 25.

Given that the budget is not being fully spent this year, it is surprising that the Council announced last week that it will  to add another £100,000 to the payments that it intends to make next year

Meanwhile many fears about Council Tax income are proving to be unfounded.

The York Council had collected 85% of monies due by the end of December. The same percentage as in 2012.

The Council is budgeting next year to collect an additional £1/4 million through “further improvement of collection performance”.