Labour are planning a “surprise” announcement next month, when they will “reveal” that they will spend an additional £2 million on highways resurfacing during the next financial year. 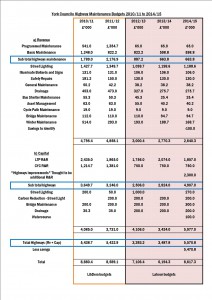 The announcement will be in response to the pressure, put on them by residents and the Liberal Democrats, who have criticised the cuts made in road and footpath repairs budgets over the last 2 years.

In total, £4 million has been cut from the repairs budget in an attempt to find funding for schemes like the repaving of Kings Square and the, largely unnecessary, £1 million street lamppost replacement programme.

Now Labour – for one year only – hope to return the budget to the £5.5 million level that they inherited from the last LibDem administration.

However, they intend to pay for the programme by borrowing more money. Already residents are facing over £1 million a year extra in interest payments – making Council Tax rises inevitable.

The figures also reveal that investment on de-icing roads and footpaths has fallen by more than half since Labour took over. Fortunately we have – so far – had a mild winter but we may not be so lucky in future years.

We hope that roads like Vesper Drive and footpaths like those on Huntsman’s Walk will now get, long overdue, resurfacing.