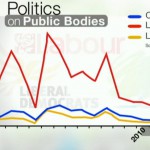 The national furore about a Labour peer being ousted – at the end of her term of office – from a role as head of OFSTED is likely to produce a “pots and kettles” response in York.

As reported a few months ago, the Chair of York Labour party was appointed to an influential local QUANGO last year.

Indeed the York Labour Party has a long history of trying to pack public bodies – including school governorships and NHS committees – with its supporters.

Meanwhile when public service vacancies are advertised, there remains a suspicion that the process is window dressing.

We reported in December that a (volunteer) Chair for a new company which will “promote York” was being sought. The post was advertised over the holiday period – more or less guaranteeing a poor response.

The Council has now announced that the present Chair of Visit York has been appointed to the post.

The Council have failed to reveal how many applications there were for the position.

Some taxpayers are now questioning the involvement that some York Council officials may have in shadowy “networking” organisations. In this case it is not the ubiquitous Freemasons, but rather, supposedly, educational organisations like “NESTA”  and  “Common Purpose”.

NESTA is run by the former head of policy in the Blair government. It is a charity ostensibly committed to developing technology based approaches to what they term “civic coding”. They recently recruited a couple of millionaire business people to become Trustees.

Common Purpose  provides leadership training courses.  It raised some eyebrows when implying that durable strategies, “leading beyond authority”,  could be implemented at local and national government level which transcended periods of democratic political change.

Both organisations have an elitist feel

Of course, such bodies are nothing new.  During the last Labour government they tended to flourish in the public sector. That their operators have now apparently moved into the private and charitable sectors means that they may still be regarded as an income sinecure.

As always, participation by public sector officials in outside organisations, should be judged on how much value the average person in the street might expect to derive from them.

If public expenditure is involved, then such benefits need to be quantified publicly and subject to independent scrutiny.

One thought on “Glass houses”