Yorkshire MEP Edward McMillan-Scott is ‘delighted’ with the increase in people in apprenticeships in York and North Yorkshire, he said during a recent visit to York College. 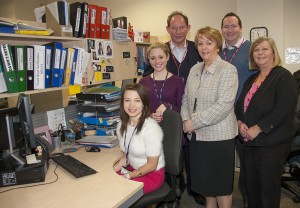 Edward visited York College following the announcement that almost 860,000 people were on apprenticeships in the UK in 2012/13. This means that more people than ever before are in apprenticeships and that the government has created over 1.5 million new apprentice places since 2010.

Edward McMillan-Scott MEP, Cllr Keith Aspden and Cllr Ann Reid visited York College, one of Yorkshire’s major apprentice providers, on Friday to learn more about their efforts to increase the number of people in York and North Yorkshire who are in apprenticeships.

During the visit they met with Denise Morrison, assistant principal for employer engagement at York College and Finance Assistants, Megan Geyerhosz (aged 20) and Hannah Smith (aged 18). Both Megan and Hannah studied an apprenticeship in Level 3 Business Administration and are about to embark on a course in Book Keeping and Accounts to help them in their roles in the Finance office.

Edward McMillan-Scott, Liberal Democrat MEP for Yorkshire and Humber and Vince-President of the European Parliament, commented: “I am delighted that over 25,000 apprenticeships have been created in York and North Yorkshire since 2010. Apprenticeships are a crucial part of the Liberal Democrat strategy to build a stronger economy. I congratulate York College for their efforts towards increasing the number of apprentices in our region. I hope that many more businesses in York and across North Yorkshire will be encouraged to employ apprentices as a result of the success that both employers and trainees locally are achieving.”

Cllr Keith Aspden, Leader of the Lib Dems on City of York Council, added: “Since 2010 there have been over 4000 new apprenticeships created in York. Apprentices are a great way of getting people into work and they also provide businesses with the loyal and capable staff they need to compete and expand. I will be working with local businesses over the coming year to ensure that they know how to take the first steps towards taking on an apprentice.

Denise Morrison, Assistant Principal for Employer Engagement at York College said: “York College delivers a range of apprenticeship programmes from across the sectors, with 600 – 700 apprentices currently studying with us. Our apprentices do very well, learning whilst on the job, and our success rates are above the national average.   There is support available for Employers to take on apprentices and the College is always looking to work with new employers.” Apprentice Megan Geyerhosz added, “Apprenticeships are great because you are able to work alongside studying, gaining more skills and knowledge to transfer to the workplace.”