According to information provided at the York Council meeting on Thursday, it appears that no decision has been made on the size of any supermarket which may be built on the British Sugar site off Boroughbridge Road. 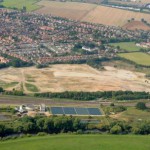 On November Council Leader James Alexander announced in the media that a large supermarket would form part of the development.

The publication of consultation plans a few days later showed no large store prompting concerns that the location of the “community hub” would be prejudiced by the extra traffic flow that such a store might generate.

Now it appear that , although a Tesco Express style “corner” store (with around 200 sq metres of floor space) was expected – and needed for the 1000 home development – no proposals for s superstore have actually been made.

A superstore can have a floor space of around 2000 sq metres.

On Thursday the Council Leader admitted that his comments had been premature.

Answering a question from Liberal Democrat Councillor Ann Reid, about the size and impact of a supermarket, he said,

“The quote from The Press was referring to a sentence in my speech given at the annual business conference. The sentence was “The site is likely to include a new supermarket, further boosting employment prospects”.

There has been interest expressed for a new supermarket in this locality but no deal is yet complete. Consultation will take place once there are firmer proposals.