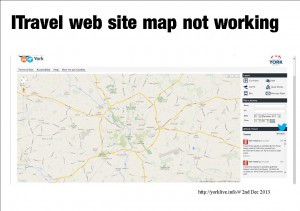 The much publicised, and very expensive, ITravel web site – launched at the beginning of the year by the York Council – is still plagued by gremlins.

It was heavily criticised for not providing the kind of real time traffic congestion camera input which has been widely available elsewhere for over a decade.

The responsible Councillor promised in October that this feature would be available within days.

But now the interactive map has crashed altogether and does not provide any information at all about car parks, road works etc.

It is an embarrassing “fail” for the City in the busy run up to Christmas and may have contributed to the sometimes chaotic traffic scenes which arose during the St Nicholas Fayre period.

Many private cars were seen using Lendal Bridge during restricted hours over the weekend suggesting that some may pay more for their Christmas shopping trip than they were anticipating.