Details of the bid submitted by the organisation which will run the new “York TV Channel” have been revealed.

The bid can be read on the Ofcom web site (although it is far from easy to find). 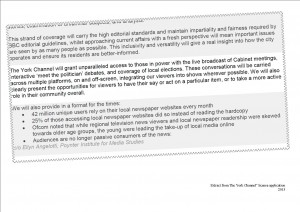 There is no evidence on the web site of what action Ofcom took to assess the wishes of York people regarding the editorial policies of any new local TV station.

The reasons for the enthusiasm, shown by the Councils Labour leadership for the new channel, are also now clearer.

They plan to have a studio in the remodelled Guildhall.

The Council is still committed to spending over £1.4 million turning the Guildhall into a “digital media hob”

The York Channel expects to rent space at this new model Guildhall.

The York Channel promises to broadcast the (one party) Council Cabinet meetings and refer to their “partner” organisation Pilot Theatre who rather mysteriously secured the Councils internet beaming contract earlier in the year.

They also claim that the Councils (largely bogus) “Big Survey” will be included in their programming.

They say,
“The York Channel will grant unparalleled access to those in power with the live broadcast of Cabinet meetings, interactive ‘meet the politician’ debates, and coverage of local elections.

The station clearly intends to engage in the local political scene.

They say, “Now is an exciting time in politics and York is calling out for a broadcast platform for political debate. The York Channel’s proposed ‘Question Time-style Show’ will debate the issues that matter most to York residents and analysing the policies, decisions and social media posts of local politicians and councillors”.

The station says that it will observe the BBC code of practice on impartiality.

The license applicant requested Ofcom not to release publicly details of the funding arrangements for the new station.

Having a local TV station should provide a boost for the City.

We wish the organisers well in their endeavours to establish a good reputation in the local community.