The Office for National Statistics have released figures today stating that there are 2195 claimants in York, a fall of 122 from last month and of 872 since October 2012. 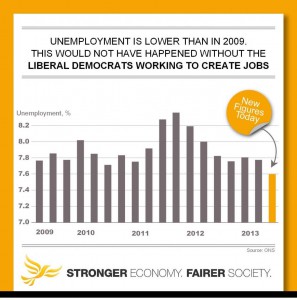 The claimant count represents 1.6% of the working population and contrasts to the regional average which stands at 3.9%.

The figures are also much lower than the national average which stands at 3%.

The change though reflects the national economic recovery.

Nationally the number of people in work has increased by 378,000 in the last year to a record breaking 29.95m according to figures released by the Office of National Statistics (ONS) today.

The number of young people in work has increased by 50,000 over the last three months, and youth unemployment has dropped by 13,100.

“This is another encouraging sign that the economy is recovering.

“Today’s figures show the total number of people in employment is now at a record high, with the rise being driven by a growth in full-time and permanent jobs.

“The Liberal Democrats in Government have helped business create more than a million private sector jobs, and now we are working to help create a million more.

“This recovery would not be happening without the Liberal Democrats in Government.

“There is a long way to go, but the economy is on the mend and jobs are crucial to building a stronger economy and a fairer society that allows everyone to get on in life.”