Tenant satisfaction with the way that the Council runs its housing operation has fallen over the last year.

A report, produced by the newly-formed “Tenant Scrutiny Panel”, looks at how the council has performed in the previous 12 months. 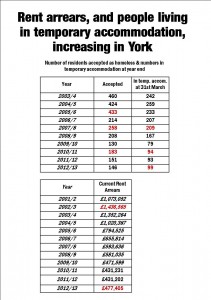 On most measures the Councils performance has declined.

• The number of tenants satisfied with repairs and maintenance fell from 85% to 82% while satisfaction with “the general condition of their home” fell from 83% to 81%.

• Only 55% of tenant adaptations were completed on time compared to 85% the previous year.

• Tenants satisfied with the standard of their new homes fell from 66% to 60%.

• There was an improvement in the time taken to relet empty properties although at 25 days this was worse than is achieved by several other Councils.

• It took longer to remove graffiti.

• Nine out of 10 tenants responding to the Tenant Satisfaction Survey were satisfied with their neighbourhood as a place to live.

The results mirror the growing dissatisfaction levels revealed by the Councils more general “big survey” the results of which were revealed last month.