Only a few months after the Council, announced that it was to provide a bus interchange next to the station, it is set to spend £500,000 on upgrading the bus shelters on Rougier Street and Station Rise. 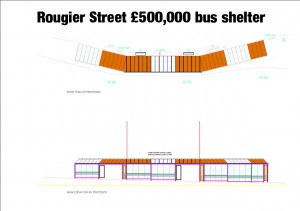 It will dub them as a “central interchange” showing the plan to demolish Queen Street bridge, and centralise facilities off the main highway, to have been a bit of idle window dressing.

A Council report talks of the “use of lighting and public art to make the facilities generally more attractive, and a better place to spend time waiting for a bus”

Actually what passengers want is the bus to arrive on time plus timely and accurate information about any delays.

In a separate announcement the Council says that it expects to spend over £1.4 million on improvements that will benefit bus services in the “inner” part of York.

Some will be spent on new sections of bus lane, traffic signals and kerb lines.

Once again there has been no consultation with passengers, residents or even local ward Councillors.