The seemingly endless series of faults on York’s traffic lights and signalised pedestrian crossings will be questioned at the Council meeting on 10th October.

Residents were particularly concerned when the pelican crossing on Front Street was faulty for several days last week. 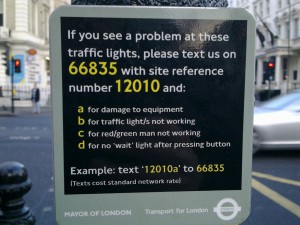 The Council has not published any reliability statistics on traffic lights for over 2 years.

“How many faults have been reported on traffic signals in York so far this year and what is the total time that signals have been out of service? How does this compare to the equivalent period last year?”

The continued unavailability of traffic camera real time information on the Councils web site will also be highlighted at the meeting.

It is 6 months since the Council opened its new £300,000 CCTV control centre and put traffic camera icons on its web based congestion map.

In July the Council accepted that the move had been premature although the North Yorkshire Council has had similar camera access available for many years. Assurances were given that the links would go live shortly.

Liberal Democrat Councillors have therefore tabled a question asking, “Why is the feed from the traffic cameras to the “itravel” York web site map still not working despite the assurances given at the July Council meeting? “

A list of all the questions submitted for the meeting can be read here: http://democracy.york.gov.uk/mgAi.aspx?ID=32384