The 251 signature petition which asked for a dog proof fence, poop scoop and litter bins to be provided at the Grange Lane playground will be discussed next Wednesday. 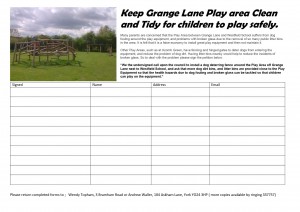 Residents collected the petition following problems with dog fouling around the play equipment.

Officials say that there is no money to pay for a fence and, of course, Labour Councillors voted last year to substantially reduce the numbers of litter and dog bins in the City.

It is possible that an existing bin might be re-positioned closer to the playground.

The cost of the fence is put at £7,200. Officials say that the scheme should be one of those funded from the estate improvement budget.

However this totals only £9,500 and must address all the needs of the Chapelfields area.

Some might think that a small reduction in the £1.4 million that the Council is going to spend – in a single day – on the start event for a stage of the Tour de France, might be more usefully be spent addressing safety and environmental problems like these.

Residents may attend and speak on the proposals at the meeting which is taking place at West Offices on Toft Green on Wednesday 9th October starting at 4:00pm.

Written representations must be made by 5pm on Monday 7th October 2013. They should be E-mailed to laura.bootland@york.gov.uk