As a result of the governments Localism Act 2011, local communities are encouraged to come together to get more involved in planning for their areas by producing neighbourhood plans, which are designed to guide new development.

The costs of preparing and consulting on such a plan are put at around £20,000.

A report will be taken to a decision session on Monday 16 September to ask for the Cabinet Member of Transport, Planning and Sustainability to approve and progress the application for a Dunnington Neighbourhood Plan. 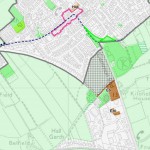 Residents still have a week until the consultation period ends on the 16 September at 4pm, and a verbal update will be provided to the Cabinet Member during the meeting.

Over 450 York residents have already had their say on what could be the city’s the first parish council to get its own Neighbourhood Plan.

However the current consultation is only about what area the plan should cover, so there is a suspicion that residents are using this as an opportunity to make a further protest about the York Council’s Local Plan policies for the village.

As the Local Planning Authority, the York council says that it is working with Dunnington Parish Council, which formally submitted an application for designation of a neighbourhood plan area.

The council is publicising and asking for views and representation between 5 August to 16 September 2013. A map of the proposed are can be found by clicking here

Still in the early stages of the formal process, the current proposal is considering the boundary of the plan area, currently designed to be identical to the present parish boundary, rather than the neighbourhood plan details.

More information can also be found in Dunnington Library and street notice boards and other prominent public areas in Dunnington.

Once the neighbour area is formally agreed, drafting of the plan may commence. Ahead of adoption the plan would need to be examined by an independent inspector. Plans must have regard to national planning policy, be in general conformity with strategic policies in the York Local Plan and must be compatible with EU obligations and human rights requirements.