In late August / early September 2012, soil and water samples were collected from across the site and sent for laboratory analysis. The waste material buried onsite was found to contain ash and clinker, brick fragments, glass, ceramics, fabric, coal, metal and timber.

Monitoring wells were also installed around the edges of the site to enable the Council to monitor ground gas.

The Council said, “The laboratory analysis results confirmed that the majority of the soil and water samples were uncontaminated. Some elevated levels of contaminants were detected – but a detailed risk assessment has confirmed that these levels do not pose a risk to people, animals or the environment. 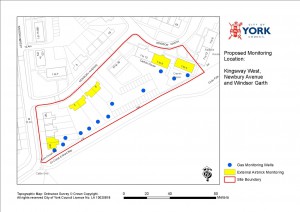 Ground gas was monitored on a monthly basis between September 2012 and March 2013. The ground gas concentrations and flows were found to be low in most monitoring wells. Although elevated levels of methane and carbon dioxide were found on part of Hob Moor (to the rear of Newbury Avenue) and we intend to investigate this area further.

Please note that the site has not been determined as contaminated land (under Part 2A of the Environmental Protection Act 1990), but further investigation is required in the vicinity of Newbury Avenue”.

The environmental protection unit has now confirmed that it has received a government grant of £35,000 to undertake an additional investigation in the vicinity of Newbury Avenue.

The investigation will involve installing gas monitoring wells in a number of gardens and monitoring the external airbricks of eight properties. They will test the gas levels every two weeks for up to six months, to assess whether the gas levels pose a risk to people, property or the environment.

Residents are being notified of the plans this Friday (6 September). A drop-in session is being held at the Gateway Centre between 10am and 12pm on Monday (9 September) to answer resident’s queries.

The answers to frequently asked questions can be found by clicking here.

Ironically the worst affected area appears to be the site selected by the Council on which to build a block of 9 new Council flats!

One thought on “Gas levels near Newbury Avenue to be investigated”