The announcement that 648 “student rooms” are to be provided on The Press office site have raised questions about discrepancies between figures included in the draft Local Plan and subsequent planning applications.

The Press site wasn’t even identified for residential use in the Local Plan.

Within 3 weeks of the plan being published, an announcement was being made that “58 purpose built student flats and 303 studio apartments would be built on the site” (Press 12th June) 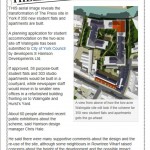 Now the actual planning application to be considered next week is for “648 student rooms”.

It’s the latest in a long line of inconsistencies with site densities in actual planning applications being double the Local Plan figure.

It also seems that the Councils “affordable homes” strategy is collapsing. A government inspector ruled that 0% affordable homes were required on the Grain Store site.

The Council had already reduced the number of affordable units required at the Terry’s development and a similar reduction was made at the Hungate and the Barbican.

We now understand that the planning application for the Sessions site has been withdrawn amid speculation that this also will now have less than 10% affordable units.

It looks like the Labour plan, to flood the market with cheap land in the hope that prices would reduce, has collapsed before it has even reached the Public Inquiry stage.