We understand that a leaflet is to be circulated in the area near Our Lady’s school on Windsor Garth giving more details of the planned development there.

Residents, who were expecting to see a plan for 29 new homes (as included in the Councils new draft “Local Plan”) now find that 56 units are proposed. 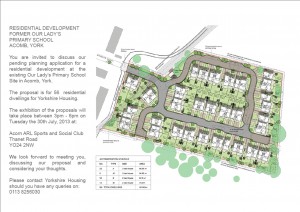 Even a casual glance at the plans suggests that the homes are being shoehorned into the site. High density developments like these tend to bring their own problems resulting from neighbour disagreements.

A very liberal interpretation of the “footprint” of the existing (school) buildings is also being taken.

There are some big issues here with the impact of the “big growth” option having on local roads, sewers and other public services.

The problem is exacerbated by the Council’s plan to build on the nearby Newbury Avenue garage site. 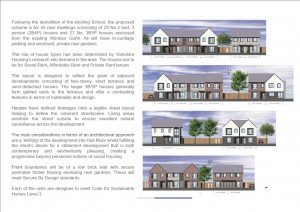 The exhibition of the proposals will take place between 3pm – 6pm on Tuesday the 30th July, 2013 at: Acorn ARL Sports and Social Club Thanet Road YO24 2NW

The notice being given to local residents is also very short given that we are entering the major holiday period.

No planning application has, as yet, been submitted.