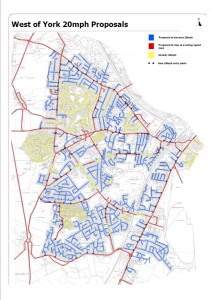 York Liberal Democrats are urging Labour’s Transport Chief to listen to residents and think again about plans for a citywide 20mph speed limit.

Despite a recent consultation which saw only 7 out of 13,000 local people support the proposals, Labour’s Cabinet Member for Transport, today approved the £500,000 20mph roll-out in West York at a council meeting. Lib Dems are now ‘calling-in’ the decision and urging Labour to abandon the scheme or delay it until the new limits introduced earlier in the year in South Bank can be properly assessed.

Liberal Democrat Councillors Ann Reid, Lynn Jeffries and Nigel Ayre are formally calling for the decision to be reversed, meaning the issue will be re-considered at a special meeting of the cross-party Corporate Scrutiny Management Committee next month.

In comments submitted to today’s meeting, the Lib Dems said the plans were “ill-considered, ill-thought out and unwanted” and “the evidence base for introducing blanket 20mph limits was rapidly decreasing as more Councils find that the speeding problems remain and accident rates even go up”. They said that the budget should be targeted on roads with a proven accident rate and areas with high pedestrian footfall.

“My objection to this political decision remain. The evidence for introducing citywide 20mph limits is slipping away. Residents are not happy, think that the money should be spent on real accident reduction measures, not a forest of signs and are convinced it is unenforceable. I urge the Labour Cabinet Member to change his mind.”

Councillors Reid, Ayre and Jeffries have given the following reasons for calling-in the decision:

This policy does not enjoy public support – the report confirms that out of 13,000 residents consulted, only 7 responded in favour. This is abysmally low for a project that will cost £600,000 of taxpayers’ money in total.

Average speeds on many of the roads proposed for the new limit are already below 20mph and additional signage would make no practical difference, except to increase street ‘clutter’ and maintenance costs. As an example, over the last 5 years Moorcroft Road has a record of 1 slight accident, an 85th percentile speed of 19mph, and a highest recorded speed of 25mph.

This scheme does not target roads with safety problems – figures provided to us by officers show that of the 338 accidents recorded in West York over the last 5 years only 48 (13%) occurred on roads where it is now proposed to reduce the speed limit. In response to this point, the report claims that “The scheme has never been primarily focussed on casualty reduction” (paragraph 36). However, on paragraph 26 the report justifies the costs of implementation against the costs of accidents.

Evidence from elsewhere in the country with blanket schemes undermines the recommendation. In Portsmouth casualty levels are higher than before the scheme was implemented and in Oxford “a similar pattern is emerging”. In Bristol residents do not feel that the roads are safer or that speeding has reduced. And returning to Portsmouth, the scheme has not encouraged a ‘modal shift’ away from car use or encouraged cycling and walking with analysis concluding that the scheme “made little difference to the majority of respondents in the amount they travelled by their chosen mode”.

The evidence is that locally and nationally the police do not have the resources or inclination to enforce all new 20mphs, with the Association of Chief Police Officers telling Parliament in March that “We are not enforcing 20mph speed limits at this moment in time”.

The decision to take Option 3 in this report and exclude Trenchard Road and Portal Road is baffling. There will be other roads in the area where “residents are against the idea” so it is unclear why these roads have been singled out.

KSI (Killed or seriously injured) figures have steadily reduced in York over the last 10 years by taking an evidence-based approach and targeting resources on areas with accident records and/or high pedestrian footfall – targeted 20mph limits have played an important part in this. This report does not provide a convincing case that this targeted and evidence-based approach should change.

If the Cabinet Member is not prepared to abandon the scheme completely, then he should delay implementation for at least 18 months so that the impact of the 20mph limit – introduced earlier in the year in South Bank – can be assessed and more evidence can be produced from other schemes across the country.