As Labour become ever more desperate in their attempts to justify their “high growth” Local Plan, one mantra that keeps being repeated in that York “doesn’t have a Green Belt”.

In fact, York has had a (draft) Green belt for several decades. There are many planning decisions (important precedents) which revolved around development being refused because of its effect on the Green Belt.

The Green Belt received regional recognition – and protection – in the “Yorkshire and Humber Regional Spatial Strategy” (RSS) which was adopted in 2007.

Although the RSS was overtaken by the Localism Act (the present governments attempt to give more power to local communities), the York Green Belt boundaries were quite specifically recognised and protected when the new legislation was enacted.

Details can be found on this Government web site
http://www.legislation.gov.uk/uksi/2013/117/note/made</a>

“Section 109 of the Localism Act 2011(1) abolished the regional planning tier by repealing Part 5 of the Local Democracy, Economic Development and Construction Act 2009(2) (which only applied in relation to England). This includes the removal of the responsible regional authorities. Section 109 also made provision to revoke or partially revoke, by order, the eight existing regional strategies.

This Order makes use of those powers to partially revoke the regional strategy for Yorkshire and Humber, which comprises The Yorkshire and Humber Plan Regional Spatial Strategy to 2026 (“the RSS”) and the Regional Economic Strategy for Yorkshire & Humber 2006-2015. Policies in the RSS which relate to the Green Belt around the City of York are retained. The Key Diagram from the RSS is retained insofar as it illustrates the retained York Green Belt policies and the general extent of the Green Belt around the City of York. The Key Diagram can be found after page 214 of the RSS. A copy can be obtained from the Planning Directorate, Department for Communities and Local Government, Eland House, Bressenden Place, London, SW1E 5DU”

So unless and until it is changed the Green Belt around York remains protected. 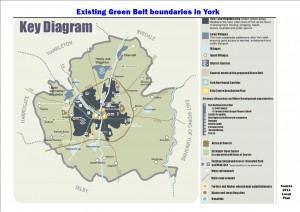 The protected (draft) Green Belt boundaries are the same as those that Labour Councillors (and others) voted in favour of in the summer of 2011 (see map left)..

The word “draft” only disappears from the description of the York Green Belt when a Public Inquiry has been held and a government Minister has approved a new Local Plan.

In 2012 Labour withdrew the proposed Local Plan from the Public inquiry after doubts were raised about the credibility of the policies contained in it regarding out of City centre shopping facilities (post the Monks Cross planning decision).

The existing Green Belt boundaries continue to be protected.

Labour should stop trying to frighten residents into thinking otherwise.