York will face off with 5 West Yorkshire authorities when it seeks funding for transport improvements in the City in future. 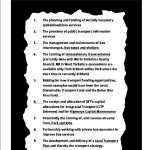 Loss of transport powers in York click to enlarge

In effect, a Leeds City Region Transport Board (Combined Authority) will be able to levy a precept on the City in the same way as currently the Fire and Police authorities do. 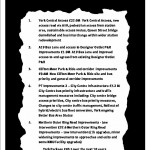 It is a big loss of autonomy for the City, with no guarantees that free travel times for pensioners would not be adversely affected or park and ride services – amongst the most successful in the country – scaled back.

The investment package favoured by Labour (see left) does not include any dualling of the northern by pass (A1237).

The section between Wetherby Road and the Haxby Road is estimated to cost £200 million alone (because of the river/railway crossings).

The financial implications for taxpayers are startling.

“There is currently no revenue budget provision for the York contribution to a Transport Fund. The funding requirement ramps up from £452k in 14/15 to £4.070m per year by 2022/23 and would need to be maintained for the following 30 years. The costs …would add to the Council’s budget gap and need to be considered in the context of the budget savings which the Council is already having to identify.

The proposed 40% LTP top-slice will have a significant impact on the ability to deliver smaller scale local schemes in York. The base LTP budget allocated for 2013/14 is £1.63m and £2.32m in 2014/15. A 40% top-slice is therefore likely to amount to around £930k per annum. Depending on future settlements the funding available for smaller local transport schemes could be in the region of £1.4m”.

There would therefore be very little money available for road safety improvements in the City.

We think that the government’s decision to devolve the funding, which is available for major transport schemes, to local authorities is the right one. It should help to demystify the process for establishing priorities.

However, the requirement to find “local money” to supplement the devolved funding has major implications for taxpayers.

It is essential therefore that the City not only gets a fair share of the available funding but also that it is spent wisely.

The Council currently intends to spend the vast majority of the available fund in the City centre.

Once again the sub-urban areas will feel that they are getting a raw deal.