The Council has for many years targeted a growth in jobs of around 1000 per year. There are currently 3053 unemployed people in York. That is 2.3% of the population. There will always be some unemployed as people seek to change jobs or who find that they do not have the skills to match the vacancies available.

So there are relatively few in York who are seeking work compared to the rest of Yorkshire where 4.9% are unemployed.

The job growth figures are, however, not being achieved by the current Council.

According to the latest census data the City’s population grew, on average, by 1% pa during the last decade. That was a time of economic prosperity. The growth did include some students who do need one housing unit per person (new build) . However, that growth cannot go on for ever.

A growth of 1% pa implies a need to provide about 400 additional homes each year assuming an occupancy rate of 2 persons per property. (In York we have around 2.3 people per property on average).

There is some catching up to do to deal with overcrowding/aspirations etc so 600 pa was a reasonable target. That was the figure supported by the then Liberal Democrat led Council in February 2011 when York’s Local Plan was first unveiled.

The plan restricted development to sites which already had planning permission plus those on brownfield (previously developed) sites.

Although there is enough land with planning permission to build over 3000 new homes, last year only around 300 were actually delivered.

In June 2011, following a local election victory, Labour amended the draft Local Plan. They upped the land supply to 800 units per year although they didn’t identify where the additional homes would be built. 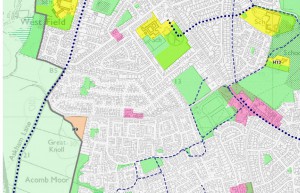 They voted in June 2011 to confirm the current (draft) green belt boundaries.

With around 4000 York residents on the housing waiting list, it is unclear why Labour want to build 22,000?

Most would be on greenfield sites.

They are clearly assuming that many of the new jobs will be filled by inward migrants from other parts of the country.

Labour’s plans are reckless and won’t be delivered. But they will cast blight across parts of the City for a decade or more

To see how the Council’s plans have changed over the last 2 years click here:
February 2011

• Lowfield School where 72 homes will be built on 2.24 hectares of land

• Land off Askham Lane (actually Foxwood Lane) where 42 homes would be built on 1.3 hectares (this site is one of those being taken out of the current draft green belt)