York and North Yorkshire police and crime commissioner (PCC) Julia Mulligan spoke at last nights meeting which was attended by around 30 residents.

In a confident performance Julia outlined her new crime and policing plan before answering questions from residents on a range of topics including anti social behaviour, drug abuse, the PCC’s role and the appointment of a new Chief Constable. 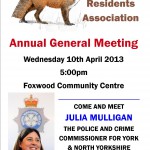 She assured residents that there was no change in policing policy on road safety and that any “wide area” 20 mph speed limit in York would have to be “self enforcing”.

Mobile speed cameras would not be used to routinely enforce it.

Several new members came forward to serve on the committee which meets on a monthly basis. More volunteers are still required. Click here

The meeting heard that the estate improvement fund for 2013/14 would probably be spent on a programme of rubbish skips. At present the Council is apparently unable to say when (or even if) such a programme will commence.

A meeting is taking place next Wednesday to launch the 2013 Foxwood Garden competition.