The Council’s decision not to collect refuse on New Year’s Day appears to have backfired. Although there was some publicity for the alternative collection days on this web site many residents were simply not told about the changes. 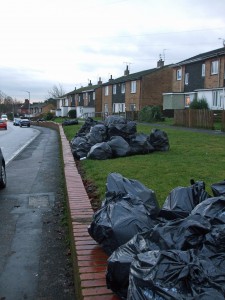 The Council relied on a leaflet issued about 5 weeks ago. Unfortunately the leaflet told residents, who were due to have a New Years Day collection, that they should leave their bins out until they were emptied later in the week.

The Council later seemed to realise that this would lead to problems with litter drift, and untidy appearance and inconvenience for residents.

It was also contrary to the advice given to householders more generally that bins should not be put out before collection day because of issues with vermin.

At the Council meeting in December the responsible Labour Councillor (“leftie” Levene) promised in response to a question that “These (alternative collection) plans will be widely publicised ahead of collections and will indicate exactly which day residents can expect to have their waste collected. We will be widely advertising the collection arrangements in the press and on our website. In addition, information will be shown in libraries, council offices, Parish Councils and notice boards”. None of these appear to have happened although there was list published on the Council’s web site together with a “post code checker”.

The closure of the Beckfield Lane recycling centre has also added to the shambles with bottle banks across the west of York full to overflowing.

Next year the Council should revert to its normal policy of treating New Years Day as a normal collection day. 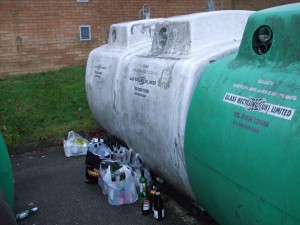