We don’t believe that bus service quality standards in York are as poor as some would like to make out.

However an insight into the secretive world of York politics came at the last Council meeting which might raise concerns.

A reasonable question had been tabled to Dave Merrett a Labour Councillor who is responsible for public transport policy in the City. The interchange went like this:

“At the October Council meeting the Cabinet Member agreed to “look into” publishing reliability information provided by those bus operators providing services under Council contracts, as well as asking the bus operators to authorise the Council to publish the number of “All York” tickets sold each month. What progress has been made and where can bus passengers in York now access reliability information for the services that they use?” from Cllr Reid

Answer
This is a commercial product of the operators. It is commercial data that belongs to the operators and the operators view is that this is commercially sensitive information. Its disclosure could have a negative impact on both the future development of all York products and on general operations. With regard to reliability data, the Council receives real time reliability data which it uses to inform highway improvements and bus service planning. Provision of the data to the Council by operators is on the basis of a data sharing agreement which restricts the Council from publishing the data on a route by route basis. The Council does, however, annually publish reliability data for the whole York bus network and this is available from the Department for Transport. (https://www.gov.uk/government/publications/quarterly-bus-statistics-quarter-2-2012

So is Cllr Merrett in favour of publishing bus reliability information in a way that is both useful and accessible?

Who knows from this answer? 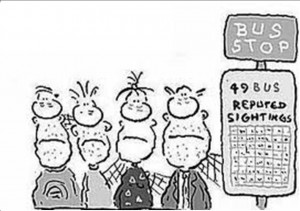 The fact that he abandoned all independent quality checks, of bus service reliability, when he took office 19 months ago, suggests that either he didn’t want to know how efficient the local bus services were, or he didn’t want passengers to find out.

……..and does he know how many “All York” tickets have been sold? The Council taxpayer clearly has an interest here as £20,000 of York resident’s money was used to publicise the scheme (Basically we know that sales of the ticket have been very small).

The solution is simple. If the bus companies still refuse to publish quality of service information then no further taxpayers subsidies, or service contracts, should be authorised for companies that do not agree to release reliability data.

There are £800,000 worth of contracts coming up for renewal shortly.

Time to give some support to bus passengers in the City we think.

2 thoughts on “Buses in York: When you don’t know the answer to a question – answer a different question!”