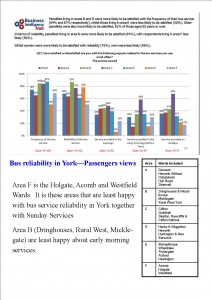 As reported yesterday, the Council’s long awaited – and very expensive – Bus Improvement Study says the City should rely on existing structures to improve bus service arrangements in York.
So the “Bus Partnership” will continue. No recommendations are made for its meetings to be held in public. Nor are any proposals made for independent monitoring of service reliability (one of the main criticisms of passengers in a public opinion survey undertaken to support the study). 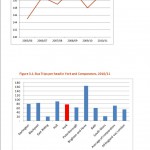 So transparency is still not on Labour’s agenda for York.

The report was considered by a single Labour Councillor (Cllr Merrett) in a behind closed doors decision session yesterday morning.

The secrecy has been condemned by Liberal Democrat Councillors who are calling for the full report to be published on the Council’s web site.

The results of a survey of passengers, revealed a higher level of satisfaction with bus services in the City than might have been expected. This, and stable passenger numbers, proved to be the death knell for those hoping to introduce a “franchise” system into the City. To do so they would have had to prove that existing arrangements were “failing”.

The study concluded that there are no insurmountable barriers to providing consistently good bus services in the City, that performance was about average when compared to other similar City’s as were fare levels. 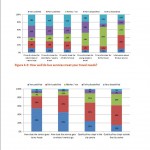 Recommendations included the introduction of a smart (go anywhere) payment card (which has been planned for the last 5 years), reducing the number of buses on the City Centre to York University route (which is regarded as being “over bussed” with 12 buses an hour) and that “Park and Ride “services should be integrated into the rest of the bus network (likely to be highly controversial with commuters who depend on a fast link into the City Centre).

The report also makes the usual genuflection towards the provision of a “bus station” naming the long stay car park next to the station as the preferred site (when the Queens Street Bridge has been demolished). The report however fails to avoid the usual pitfalls of such a plan; not least the costs of provision and maintenance of such a facility and the impact that routing all buses via the station would have on highways congestion. 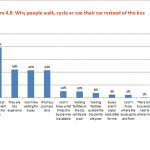 The report has many weaknesses. It fails to address problems with sub-urban bus stops where “next bus due” screens are thin on the ground. It doesn’t mention the need to use GPS monitoring systems to avoid “bunching” and, of course, fails to recognise the need for public “real time” reliability information. No priority is given to the need for investment in modern buses. The last major investment in fleet modernisation in York, other than for Park and Ride services, was the ill fated ftr in 2006.

The Council will have to work very hard to get the support of passengers and the government for investment in a plan which seems to rely too much on further increases to City centre car parking charges as a way of forcing people onto the bus service. 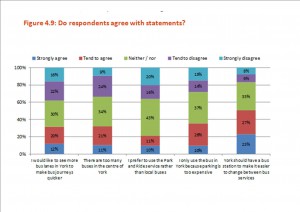