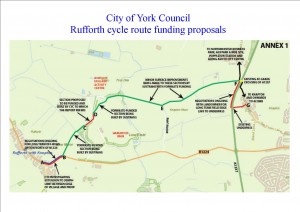 As previously reported, the Council are proposing to construct a bridleway linking Rufforth to Knapton. It is likely to be used by some cyclists to avoid the B1224.

The Council has been conducting a low profile consultation exercise on its web site on the plans. http://www.york.gov.uk/transport/cycling/Rufforth-Knapton/

The consultation is due to finish on 16th November 2012.

However this does not include improvements to the arrangements for crossing the A1237 near Knapton.

It is this section of the route which is causing the most safety concerns.

The project is due to be discussed at a meeting taking place next Monday (19th Nov.)