An investigation by the Information Commissioner has concluded that the York Council has breached data protection legislation by publishing resident’s identities on a public web site.

The problem arose when in March 2012 the Council launched what it described as a unique way of reporting – using an Iphone – issues such as graffiti and dumping. The system allowed a photo of an issue to be sent to the Council.

It turned out that, far from being unique, the “App” was simply a copy of a “Keep Britain Tidy” system which has been adopted by many other Councils. Elsewhere it is known as “love clean streets” and can also be used to report “potholes” and other problems (click here http://www.lovecleanstreets.org/Reports/LiveMap)

The system – which is basically a sound idea – cost around £8000 to implement in York but unfortunately the need to preserve the privacy of user’s details wasn’t recognised.

When this was pointed out to the Council Leader at a Council meeting in July he declined to take any action. (click here http://stevegalloway.mycouncillor.org.uk/2012/07/27/boris-johnson-blamed-for-york-council-confidentiality-lapse/)

The lack of action by the Council prompted a complaint to the Information Commissioners Office in August.

At that time the Council Leader in response to media enquiries said, “I am sure the system we have set up complies with all necessary regulations”. 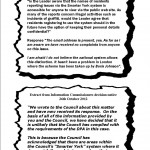 Now the information Commissioner has decided that residents must be told that any information that they provide could be published on a publicly accessible web site. Users have the option to use a pseudonym to preserve their privacy.

The Commissioners office has decided not to take any further legal action against the authority on the basis that the “App” signing on system will be refined to protect the privacy of users.

All this should have been done months ago of course, but we are pleased to see that the Smarter York reporting system has now been updated. 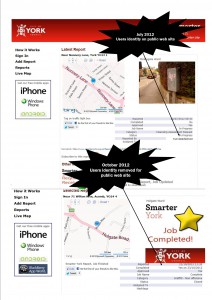 How web site information has changed

NB. A Freedom of information request in August revealed that about 50 cases a month were being reported using the new App (click here http://www.york.gov.uk/content/foi/988224/Y5953_-_attachment.pdf)

Unfortunately the other major complaint about the system – that members of the public do not receive any feedback telling them what has been done about issues reported – has yet to be addressed by the Council. We think that users should be offered the opportunity to have an Email confirmation when – for example – litter that they have reported has been removed.