The York Council has ordered 2405 brand new seats and seating units for its new HQ. 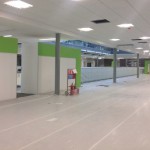 Around 1000 staff will be accommodated at the new Toft Green building when it opens next March.

A Freedom of information request has revealed that the Council will spend £2.4 million on furnishings and services of which £917,000 will go on new computers and information technology.

Items already ordered, and being supplied by “Flexiform”, include:

19 “poser” tables are planned together with 63 coffee tables.

Concerns had been raised earlier in the year about a lack of transparency over decisions on the office move. While the expectation had been that – to make best use of modern open plan office working methods – some new furniture would be required, no Council Cabinet member has publicly authorised the specifications issued to contractors, nor has any scrutiny committee reviewed the plans.

There was an expectation when the project business case was signed off in 2008 that, where possible, existing items of equipment, fixtures and fittings would be reused.

This more cautious approach now seems to have been abandoned.

The Council has not yet tendered for the supply of “white goods”, internal signage or audio visual equipment.

The revelation comes 3 months after the Council Leader refused to answer questions about the management of the move to the new accommodation.

“Would the Council Leader please indicate how – and by whom – the specification for the fittings, fixtures and furnishings required at the new Council HQ is being drawn up and, what is the agreed budget is for each service/activity area? Would he explain how he intends to monitor the prudent use of the budgets that have been provided for this part of the HQ project and how he intends to update Council members and residents on the progress being made?”

The Council Leader responded that it did not fall within his area of responsibility.