Liberal Democrat Transport Minister Norman Baker has backed calls for the York Council and local bus operators to publish details of the reliability being achieved on bus services.

In a letter to Steve Galloway the Minister says, “Surveys have shown that punctuality and reliability are the primary concerns of actual and potential bus users. … It is essential for passengers that the bus turns up, is reasonably on time and arrives at its destination when expected…..We expect Local Authorities to be accountable locally in part through publishing data sets which can be benchmarked” 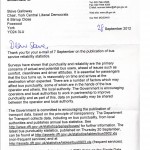 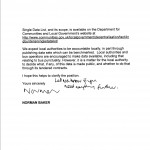 The response comes following concerns that the York Council is so far refusing to publish the details that it holds on local bus service reliability.

Nor do most local bus operators publish service punctuality data on their web sites as a matter of routine.

We are absolutely clear that passengers should be given the information that the council holds on its contracted services and that it should release, each month, the “mystery traveller” information that it gathers on reliability.

Bus operators also should release the information which they gather from their GPS monitoring systems. 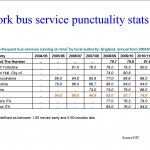 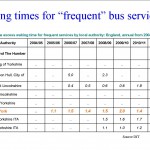 The data already collected by the DfT (see left) actually suggests that – up to March 2012 – bus reliability in York was gradually improving. What has happened since then is a mystery to passengers.

Exceptional circumstances such as the recent floods will, of course, affect services; but that is no reason for secrecy.

Meanwhile a report which was to have included a bus improvement study for the City was quietly removed from the agenda of a Council “decision” meeting which was scheduled for 27th September.

With expenditure of over £200,000 of taxpayers money already committed to introducing a quality bus contract system into the City, passengers will now be wondering when they will see any improvements in return for their investment?

The issue of bus reliability is likely to be raised at the York Council meeting next Thursday by LibDem transport spokesperson Ann Reid.

In the meantime we understand that some passengers are hoping to set up a new bus service watchdog group in the City. More details will be provided when we get them.