The Council report on the proposed sale of the Councils Hungate site to a developer – who has lined up Hiscox as one of its end users – has now been published.

It produces more questions than answers.

The actual tenders received for the land are not being revealed by the Council.

Part of the reason for the coyness may that the EU has been cracking down on state subsidies for private business. Councils are subject to these restrictions.

On the face of it, the Council leadership is proposing to do just that by selling off a site for less than its market value and not to the highest tenderer. The receipt will fall short of the aspirational value of £5 million which would have been achieved when the economy picked up. 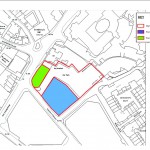 The Council officer report http://tinyurl.com/Hungate-sale-Oct-2012 reveals that they currently value the site at £3.77 million. This is lower than the aspirational value but is still more than the cost of acquiring the ambulance station part of the site in 2007 (The Haymarket car park and Peasholme building were already owned by the Council).

The report admits that the Councils capital programme – which includes the madly imprudent £20 million “Economic Infrastructure Fund (EIF)” – has assumed a £3.8 million receipt from the site. If there is no sale, then that will mean more borrowing, with income of £90,000 a year required from taxpayers to service every £1 million borrowed.

Borrowing to finance the EIF is set to cost taxpayers £1.8 million a year in debt charges.

The Council was under no pressure to sell. The site brings in £150,000 a year in parking fees. If the car park were extended to include the former ambulance station site, then that income would increase to £300,000 a year – more than enough to pay off the annual principal and interest payments on any capital borrowed to acquire the site in the first place.

This is a highly desirable City centre site. It will certainly increase in value. Virtually every piece of land bought by the Council over the last 3 centuries has soared in value in the medium term.

So why not be patient?

The answer, sucked in by a gullible media earlier this week, was that “up to” 300 additional jobs could be created. The multiplier effect of the income that these jobs generated would help to stimulate the local economy.

That is true. But it is also true of virtually any other type of investment anywhere in the City (The Monks Cross 2 project will create over 600 jobs).
….and there are other development sites in the City that are stalled. Several are within a stones throw of the Councils Hungate site.

The real reason is that the present Council were desperate to record any kind of economic gain that they could claim was down to their efforts. As it happens the developer probably did 99% of the work …..but they won’t let that get in the way of a little political spin!

All the other projects that are coming to fruition – everything from the Community Stadium through to the Sports Village at Heslington – had their genesis in the previous LibDem administration.

All Labour have to show for their efforts over the last 18 months are a string of cuts to the quality of public services in the City.

They badly needed a tangible success.

………..but there is still the issue of planning permission to be addressed. The developer is unlikely to complete the deal until permission has been granted. Early drawings of what is proposed suggest that this will not be a “shoo in”.

One option available to the Council would be to advertise the site on the open market. That would be the only true way to establish its current value. Clearly isn’t going to happen now.

The scale of the gamble being taking will only become clear to taxpayers when the Councils accounts are published at the end of the year. The size of the capital receipt will be revealed then.

If it is significantly less than the current (independent) valuation then it will be another nail in the coffin of an administration that has established new record levels of imprudence and economic naivety.