1600 update. Flood warnings have now been issued for river front properties in York as river levels continue to rise.

1400 – It looks like record high levels are being reached on the Swale (Catterick Bridge), Ure (Ripon) and Nidd (Gouthwaite). http://tinyurl.com/Ouse-catchment

All this water will be heading for York so it’s mildly reassuring that neither the Council nor emergency services seem to be concerned enough to issue high level warnings or put their contingency plans into gear?

A lot, of course, depends on when it stops raining.

These are the direct links to the Environment Agencies water level monitoring stations for York.

They give the current river levels and compare them to historical records.

Levels are all now in the range where some flooding is possible and the Agency is forecasting further rises in the levels later today. 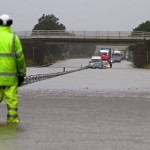 Update 1300: A1 north & south blocked near Darlington. East Coast main line services to and from the north suspended.

Mid day Update: St George’s Field car park in York is beginning to flood. City of York Council ask any motorists parked there to return to their cars

It the water level rises above the top of the “no entry” sign then some properties are likely to flood.

You can register to receive flood warnings from the Environment Agency here https://fwd.environment-agency.gov.uk/app/olr/home

4 thoughts on “Floods in York”