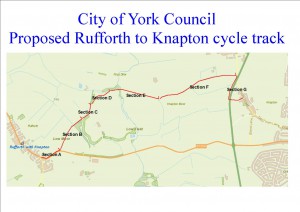 The Council is advertising its preferred route for the Rufforth to Knapton cycle path.

Effectively it is trying to use existing rights of way to establish a Bridleway. This would allow cycles to use the route. The route passes to the north of the Harewood Whin waste disposal site.

However the route suggested, as well as being likely to attract objections from landowners, is approximately twice the length of a more direct, and flatter, route which could be established alongside the B1224.

The latter is the route which would have been facilitated by the land acquisition required to establish a salvage centre at Harewood Whin.

Another alternative, which would be quicker for cyclists wanting to access Acomb Front Street & York City Centre, would have been to use the Grange Lane/Airfield bridleway which was reopened a couple of years ago. 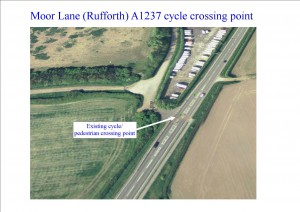 In all cases the main problem involves cyclists crossing the A1237 safely. The Councils preferred line uses the existing crossing point at Moor Lane (Knapton) which is less than perfect.

Whichever route is preferred, there is a strong case for installing a foot/cycle bridge (or underpass) to minimise risks at the northern by pass intersection.

Full details of the Council’s plans can be found here: http://tinyurl.com/Rufforth-cycle-path