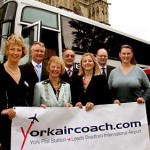 It seems that the Councils claims to be promoting a new coach link to the airport from York have been exaggerated.

An express coach service to Leeds/Bradford Airport was first introduced in February 2007 offering a direct 55 minute duration trip to the airport at a fare of £15 return with an hourly frequency. The original route was from York Rail Station, via Upper Poppleton, St James Retail Park (Knaresborough), Weeton Station & Leathley Lane End and on to Leeds Bradford Int. Airport

Usage on the First service was very low and even re-routing the service to pick up passengers from Leeds failed to prevent it being abandoned a couple of years ago.

One of the main problems was the need to link feeder buses to the 24/7 service. Essential if holiday makers were to be attracted to what was promoted as a cheap alternative to car & taxi.

At the last Council meeting the Leader indicated that a new service would be more frequent and suggested that the 55 minute journey time could be reduced. It remains unclear how this could be achieved without a massive investment in road improvements.

It also appears that the aspiration to provide a rail spur from the York/Harrogate/Leeds railway line to the airport has been quietly shelved.

The one piece of good news recently, for York’s air travellers, is the government’s decision to invest heavily in the trans-Pennine rail network which should substantially reduce journey times to Manchester airport.