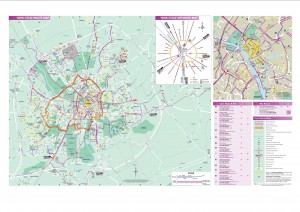 The Orbital Route is a circular strategic cycle route around the city delivered by City of York Council in response to feedback from York residents wanting quiet mainly off-road routes between the inner and outer ring road. The Orbital Cycle Route is designed to allow users to ‘hop on’ and then ‘hop off’ to destinations around the city. Destinations are signposted by the already familiar blue signs as well as numbered way markers (ranging from 1 to 26) that can also be seen on the popular cycle route map. With the previous Cycling City York and current i Travel York programmes, a number of infrastructure improvements have been made to plug gaps in the existing cycle route network. This will help to ensure that those making journeys by bicycle can travel all the way around York quickly, easily and more safely.

The Orbital Cycle Route, which is depicted on the York Cycle Route Map, begins and ends at Millennium Bridge and features 26 distinctive, numbered metal ‘way-markers’, which highlight the route at key points around the city. From there, the route heads west through South Bank and skirts around The Knavesmire before crossing Hob Moor. It then continues north along quiet residential streets in Acomb before crossing the River Ouse at Clifton Bridge.

From Clifton Green, the route proceeds up Water Lane and Kingsway North, taking advantage of a newly-built off-road cycle path, before heading onto Crichton Avenue, where major improvements were carried out during 2010. It then joins up with the off-road Sustrans cycle track, known as the Foss Islands Route, and continues onto James Street before reaching the junction with Lawrence Street, where major improvements to the signals and cycle crossings have recently taken place. The route then returns to Millennium Bridge from the east via quiet residential roads close to The Barbican and along the riverside cycle track at New Walk from the Blue Bridge.

For more information about cycling facilities and infrastructure in York, visit the Cycling City York website at: www.cyclingcity.york.org.uk, Later in the year there will be a new website replacing this as part of the i Travel York programme catering for all York’s travel needs and information