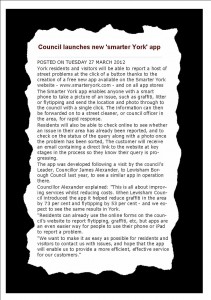 The York Council Leader has rather proudly announced the launch of an “app” for smart phones.

In a media release he urges residents to go to the web site www.smarteryork.com.

In a spirit of helpfulness we can tell residents that the actual web site address is http://www.smarteryork.org.uk

Whether the cost of developing this new reporting tool can be justified is another matter. The top priority for the Council should be to stop environmental vandalism (Graffiti, fly-tipping etc) in the first place. A quick and efficient clean up is also necessary, but there is little evidence to suggest that York residents are failing to do this using “old fashioned” communications methods such as the telephone, Email or via the Councils web site.

Still, Iphone at the ready, we’ll be trying the new system out over the next few weeks.

NB. This hiccup comes a few days after residents started receiving their Council Tax bills. The explanatory leaflet issued with the demand assured residents that the Councils gross expenditure for the forthcoming year would be a world record beating “£354,937,000,000”.
The equivalent expenditure agreed by the LIbDem Council for 11/12 was, a quite parsimonious, £341,644,000!

4 thoughts on “Not so smart red face as Council Leader flunks IT test?”