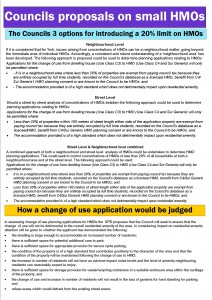 The Council will be considering on 9th January a plan which would limit the number of shared houses in the City to 20% of the total stock.

The calculation may be done at either a (900 home) neighbourhood level or on a street by street basis.

At the moment only “houses in multiple occupation” (HMOs) with more than 6, non related, occupants need planning permission. The new rule would require an application for any property where 3 or more, non family, members share facilities. It is aimed at controlling the growing number of properties in parts of the City which are let on a “rooms” basis mainly to students.

Those living near some HMOs complain about the unkempt appearance of properties particularly during the 4 months a year that they are empty. Others point to lifestyle differences in neighbourhoods which otherwise might be dominated by either families or retired people. Residents in estates like Badger Hill have been particularly vocal with their complaints.

The political parties represented on the Council were divided on how to deal with the issue. The Liberal Democrats favoured the introduction of an “approved landlord” scheme which would have controlled – by agreement – both the maintenance of properties and a code of conduct for occupants.

Labour favoured an “Article 4” Direction which required a planning application before any property could become a HMO.

The major issue is now what percentage of HMOs should be allowed in an area or street before ithey effect its “character” ?

The 20% limit will come as a surprise to many with a significantly higher figure having been canvassed.

If a 20% limit were to be applied to a neighbourhood then it would have less of an effect than applying a street by street limit.

A combination of the two restrictions (neighbourhood + street) could mean that large sections of the City would be excluded from further HMO conversions. This would have the effect of pushing the conversions further away from the Universities with repercussions for transport and other related public services.

An unintended consequence may be that ordinary working people – who share accommodation – could be caught by the restriction. The option of limiting the change only to student occupied properties (which can be easily identified as students are exempt from paying Council Tax) is not being recommended by housing officials.

Many students would prefer to live on campus. The historic attractions of living in the community included lower rent levels. But £100 a week for a room is not uncommon these days and campus flats are increasingly attractive. However only limited amounts of purpose designed student accommodation is currently in the pipeline.

York is now highly dependent on the “knowledge sector” for its economic prosperity. Setting an artificially low limit on the number of HMOs permitted in an area could damage that prosperity.

At the moment the Council seems to be in danger of going too far in trying to placate sectional interests.