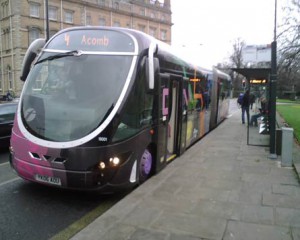 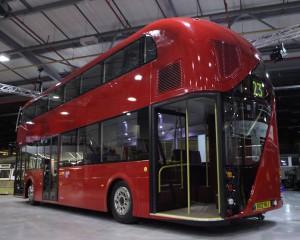 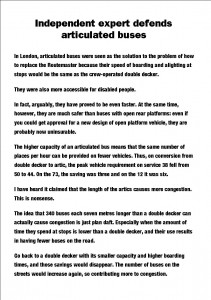 Strange article in The Press earlier in the week with the Council Leader apparently saying the ftr running agreement would be scrapped “in June”.

Strange because the 5 year deal had already come to an end in June 2011; 5 years after it was signed at a York Racecourse ceremony.

There was never any question of the agreement being extended.

It was put in place to ensure that the number 4 bus route remained unaltered for a period long enough to ensure that taxpayers got a return on the investment made in providing off street car parking, resurfacing roads, improving junctions and installing raised kerbs to improve access from bus stops.

It was thought that the Press story was linked to a bus service report that is due to be considered at a Council Strategy meeting next Thursday (5th Jan). However the report makes no mention of individual bus routes and simply agonises over the need to consult residents about further changes to the bus network (more on this later in the week).

While no one would pretend that the ftr has been greeted with universal acclaim, the vehicle the vehicle provides high levels of accessibility for disabled people and set new standards of comfort in its spacious air conditioned passenger compartment. The hosts/conductors are generally friendly and valued while the ultra modern appearance still attracts children to the City who simply want to “have a ride” on the vehicle.

The last Council hoped to use hybrid type buses on the new Park and Ride routes. It would be a small step to extend the modernisation to include “stage carriage” services like the number 4. Trials of some of the low/zero emission bus options available took place earlier in the year on the Designer Outlet to City centre Park and Ride route. The trial was abandoned by Labour when they took control of the Council in May.

A key issue would be the cost for companies who want to modernise their bus fleets with, for example, the new style double deckers recently introduced in London costing 4 times the price of an £300,000 ftr.

The London Mayor – Boris Johnson – hopes to get the cost of his “Routemaster” style vehicle down to £315,000 each through bulk purchase. 11 mpg on the new hybrid is promised although the inclusion of a “hop on, fall off” rear platform means that a conductor would have to be carried.

More realistically, a conventional 2012 hybrid “bendy bus” has many advantages and costs only about £20k more than an ftr.

In the meantime a resident writing on the Press website has suggested that the Council Leader is tilting at windmills when claiming to “slay” the ftr.

5 thoughts on “ftr – the bogus claims”