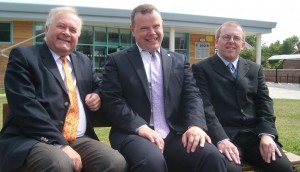 Also competing for residents 3 votes will be 3 Green candidates & 1 Conservative. (The Conservative lives in Dunnington!)

The Local Team all live in the Westfield Ward.

Their details in brief are:

Steve Galloway lives in Foxwood and has been a local Councillor for 38 years. A former Lord Mayor of York, he was the Council Leader between 2003 and 2008. In Westfield he led the campaign to provide a roundabout at the Askham Lane ring road junction and backed the new Front Street “Explore” library.

Askham Lane resident Andrew Waller is the current Leader of the council. He was first elected to represent the Westfield Ward in 1994. Andrew championed the replacement of the Hob Moor and York High school buildings and was the architect of the 3 fold increase in recycling rates seen in the City in recent years.

Mark Waudby lives in St Stephens  Road . He had 8 years experience on the York council before moving to Westfield. He recently led the fight to have the White Rose site  redeveloped quickly and is a keen supporter of our new “Energise” sports and leisure centre.