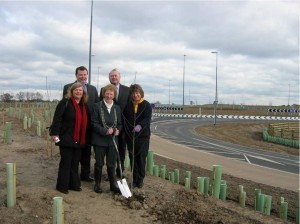 The official opening of the new Askham Lane roundabout was set for 11th March.

The Knavesmire Nursing home on The Green had closed and there were problems with vandalism. The building remains empty although the lease in now nearing its end.

Work on the new York High school building was on target.

Resident planted bulbsflourished on Askham Lane, Foxwood Lane and Gale Lane……. In response to a survey, 66% of Lowfields Residents said that they had seen a PCSO patrol in the area.

A row erupted on the Council as Labour tried to divert more funds into Christmas lights and fireworks by reducing the highways maintenance budget. Their plans were defeated.

The “Kingsway Project”, which was aimed at improving the well being of low income residents living in the Kingsway West area, was conceived. The project was so successful it is now being rolled out in other parts of the City.

Residents supported the provision of a low cost food store on the site of the, soon to be replaced, Edmund Wilson Pool.  Work on the replacement swimming pool on Cornlands Road had started.

Residents said that the old Lowfields school site should be reserved for elderly person’s accommodation (it will be marketed shortly|)………High efficiency “Passivehaus” homes came to York for the first time.

A survey revealed anti crime measures to be Hob Moor resident’s top priority……… High winds damaged some trees in the area while residents asked for metal railings to be provided around the Bachelor Hill amenity area……. Building works at The Burn started……… There was an outbreak of graffiti in the Front Street area. The new CCTV camera played a part in identifying those responsible.

Lidl were announced as the successful bidders for the Edmund Wilson pool site,

The High Schools temporary home at Lowfields was damaged in an accidental fire. Everyone rallied round to minimise disruption.

A new seat was provided on Front Street and the Ward committee funded a “big clean up” when rubbish wagons toured the area collecting unwanted items.

The Council launched a bid for funding to reduce congestion on the ring road. It included 3 new park and ride sites.

Lowfields residents opted to have the road humps removed from their street after the High school moved……… A new zebra crossingwas installed on Cornlands Road and, in the same area, tenants got double glazing following a request from us. (The Council recently decided to extend the double glazing programme to all Council homes in the City)